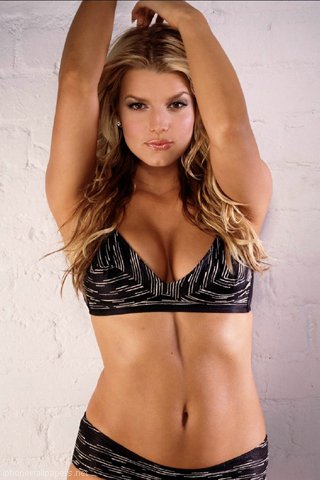 Jessica Simpson was born in Dallas Texas in 1980. She grew up in the small town of Richardson. Her father Joe is a psychologist and served as a youth minister at a local Baptist church. This allowed Jessica to partake in church activities and sing in the church Choir. At age 12 she auditioned for the Mickey Mouse Club but didn’t get the job. She returned to Richardson with her father as her manager. She went on the road with her father and would perform through churches. She also sold her home recorded albums. Everyone was charmed by her voice and news of the talented Jessica soon reached Tommy Mottola who was stunned by her vocal skills. In 1999 she released the album “Sweet Kisses.” She joined the boy band 98 Degrees on their tour and fell in love with one of the singers Nick Lachey. Their romance helped make their duet “Where You Are” Successful. In 2001 she released her album Irresistible which was very successful. In 2002 Nick and Jessica got married. MTV offered the couple their own reality show and in 2003 Newlyweds: Nick and Jessica debuted. It was a great hit and went on for 3 seasons. In 2003 Jessica also released her third album In This Skin. Around the time of her marriage Jessica appeared on the Twilight zone as well as a few episodes of That 70’s Show. In 2005 she made her big screen debut as Daisy Duke in The Dukes of Hazzard and in 2006 she appeared in Employee of the Month. During the start of her film career her and Nick filed for divorce and it was finalized in 2005. In 2006 she released her fifth album A Public Affair. Since Lachey she dated John mayer and had a relationship with Tony Romo who later dumped Jessica. She has also since released her first country album.